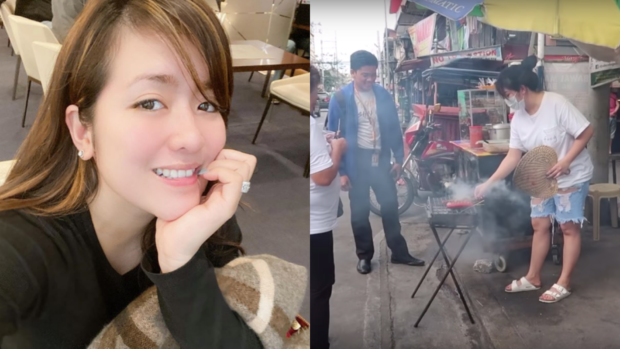 Angeline Quinto relived one of her cherished childhood memories when she recently sold street food around Manila.

Whenever she sees street vendors, Quinto remembers how she used to sell drinks and snacks when she was in grade school, she said in her vlog post “Isang Araw na Paglalako?!”, on YouTube last Friday, Feb. 14.

While Quinto recalled how she and her friends used to sell fruit shakes, she came up with the idea of vending on the streets again.

To start her day of selling, she rode a jeepney towards the University of Santo Tomas. She then made her way to a food stall, where she cooked and sold sticks of barbeque, isaw (pig or chicken intestines) and betamax (pig or chicken blood shaped in squares). The singer later took a break from selling and ate a stick of barbecue and rice with just her hands.

After her time at the stall, Quinto steered a food cart along the streets to sell more food and drinks. She also manned another cart that carried various household items such as brooms, hangers and basins.

Quinto later sold some balut (fertilized duck egg) by a convenience store at around 7 p.m. Aside from selling various food and items on the streets, the singer also got a taste of being a driver for GrabFood. She made her way to the customer using the motorcycle and uniform of her friend who works for the food delivery service.

While driving the motorcycle towards the client’s location along Lacson Avenue, Quinto passed by the track of the Philippine National Railways company. She also drove by the street where her childhood home was located. The singer seems to have a natural knack for riding a motorcycle as she faced no trouble on her way to the customer.

Quinto began appearing on TV when she joined the singing contest “Star for a Night” in 2002. She has since performed movie and TV theme songs, such as “Till I Met You” in the 2014 film “She’s Dating the Gangster”. JB

Angeline Quinto looks back on P2,500 gigs at weddings, debuts